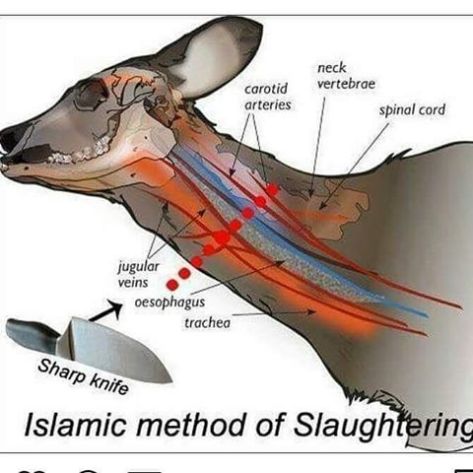 Islamic has the most merciful way of Slaughtering Animals

1. ‘Zakkaytum’ is a verb derived from the root word Zakah (to purify). Its infinitive is Tazkiyah which means purification. The Islamic mode of slaughtering an animal requires the following conditions to be met:

a. Animal should be slaughtered with sharp object (knife).

The animal has to be slaughtered with a sharp object (knife) and in a fast way so that the pain of slaughter is minimised.

b. Cut wind pipe, throat and vessels of neck.

Zabiha is an Arabic word which means ‘slaughtered’. The ‘slaughtering’ is to be done by cutting the throat, windpipe and the blood vessels in the neck causing the animal’s death without cutting the spinal cord.

c. Blood should be drained.

The blood has to be drained completely before the head is removed. The purpose is to drain out most of the blood which would serve as a good culture medium for micro organisms. The spinal cord must not be cut because the nerve fibres to the heart could be damaged during the process causing cardiac arrest, stagnating the blood in the blood vessels.

2. Blood is a good medium for germs and bacteria.

Meat slaughtered by Islamic way remains fresh for a longer time due to deficiency of blood in the meat as compared to other methods of slaughtering.

4. Animal does not feel pain.

The swift cutting of vessels of the neck disconnects the flow of blood to the nerve of the brain responsible for pain. Thus the animal does not feel pain. While dying, the animal struggles, writhers, shakes and kicks, not due to pain, but due to the contraction and relaxation of the muscles defecient in blood and due to the flow of blood out of the body.

Islam forbids any kind of atrocity on animals & even in sacrificing or slaughtering animals.

One thought on “Islamic Method of Slaughtering Animal”