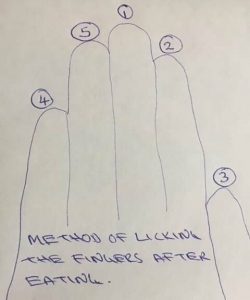 Ka’b bin Malik (Radhiyallahu ‘Anhu) says: “It was the noble habit of Rasulullah (Sallallahu ‘Alayhi Wasallam) to use three fingers whilst eating and he also licked them”.

Commentary: It has been mentioned in some narrations that he first licked the middle finger, then the Shahaadah (index) finger, then the thumb. It was the noble habit of the master to use these three fingers. The Ulama have mentioned many benefits in this method (sequence). The first is that the licking of the fingers will run in a manner where it goes to the right. The Sha-haadah finger will be on the right of the middle finger. The second is that the middle finger is long, therefore it will be more greasy. For this reason it is oppropriate to begin with this finger.

Khattaabi says: ‘Some foolish people do not like to lick the fingers, and think it disgraceful, but they do not reason that the food that is on the finger is the same that they have been eating, there is nothing new on it’.

Ibn Hajar says: ‘If someone thinks of his own deed as disgraceful, it could be discussed. But to think of any act of Sayyidina Rasulullah (Sallallahu ‘Alayhi Wasallam) as disgraceful, could be  dangerous and may even lead to kufr (disbelief). -Jam’ul Wasaa-il.

In  reality these things have alot to do with habit. If one has a habit of something, it does not matter, and one will not even take notice of it. This is why if one naturally feels these deeds to be disgraceful, then too one should try to form a habit of it, (and should remind one’s self that it is the Sunnah of Sayyidina Rasulullah (Sallallahu ‘Alayhi

Commentary: It was the noble habbit of Sayydina Rasulullah Sallallahu ‘Alayhi Wasallam to eat with three fingers only. Although we find in a few narrations that he used five fingers also. In most narrations the three fingers; thumb, and middle fingers are mentioned. The benefit of eating with three fingers is that the amount taken (rnorsel) will be less, and one will not eat more. Imaam Nawawi says: ‘We gather from these ahaadith that it is mustahab to eat with three fingers’. For this reason the fourth and fifth fingers should not be used unnecessarily. But if such food is eaten, where it is difficult to use only the three fingers, then there is no harm in using more. Mulla ‘Ali Qari has written that to eat with five fingers is a sign of greediness. Many a time due to the morsel being big, it results in the stomach being unnecessarily strained, it is also the reason for food getting stuck in the throat.